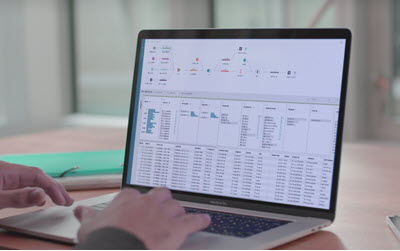 Tableau Prep – The Fun, Fast, Effective Way to Clean and Prepare Your Data for Reporting

What is Tableau Prep?

Tableau Prep is a desktop software tool that was introduced this summer. It’s a new offering in the Tableau Product family, joining Desktop, Server, Online and Reader. 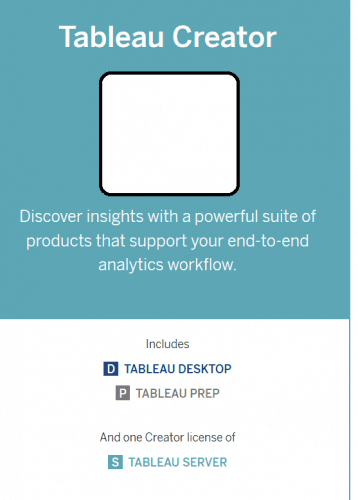 Tableau Prep is a separate software installation, with its own license key. With the new licensing of Tableau, everyone with Tableau Creator (which includes Desktop) also has access to Tableau Prep.

Tableau Prep is a tool to manipulate your data and get it into the desired format. This process could include:

All of this and more can be achieved in Tableau Prep, in an easy-to-understand, visually attractive, point-and-click tool.

Tableau Desktop is the white icon on the left. Tableau Prep is the blue icon in the centre.

You’ve heard it repeatedly, for years – prepping and cleaning the data takes far longer than the actual dashboard design or reporting project. Everyone needs a tool to prepare, cleanse, transform and manipulate their data. Often, this is done in cumbersome ways inside Excel, but Tableau Prep offers a much easier and more scalable solution.

There are many competing tools to cleanse and prepare data – leading vendors would include Alteryx, Talend, or Informatica as well as tools that are tied to a specific environment like SQL Server Integration Services (Microsoft), Business Objects Designer (SAP) or Infosphere (IBM). What makes Tableau Prep unique?

First, integration with the Tableau environment. Tableau Prep outputs Tableau extracts by default and contains an option to publish them directly to Tableau Server. 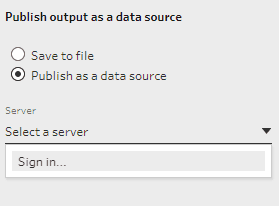 Second, Prep maintains the clean look and feel that characterizes Tableau. Prep offers a very simple suite of tools to manipulate your data. At any point, there are only 7 possible “steps” that can be added to a workflow. Some tools offer hundreds of different operators to flatten hierarchies, geocode addresses, perform complex filters and call APIs. Like Tableau desktop itself, Prep opts for a more minimal approach. 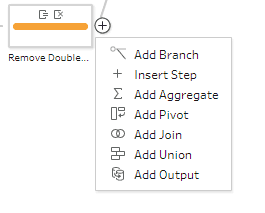 Within those steps, though, there is considerable complexity. A “clean” step can filter, add new columns, remove rows or columns, group values together and perform many other operations. For example, here’s a clean step that groups, filters, changes data types, removes fields, trims spaces and adds new columns: 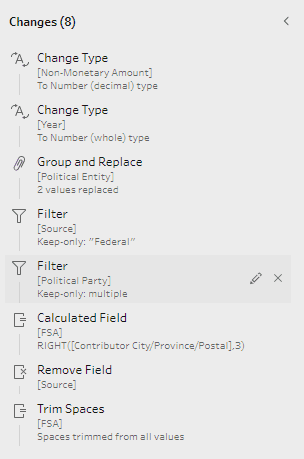 Third, Tableau Prep leverages the Tableau Data Engine to perform extremely quickly. In our in-office testing, Tableau Prep was able to reshape and write 1.4 BILLION rows of data locally in under half an hour – a very impressive result.

Some of these can be achieved in Tableau Desktop, such as creating calculated fields. However, some tools are specific to Prep, such as the fuzzy matching that can be performed on text. Suppose we had our “greatest artists of all time” data table, but it contained some messy data: 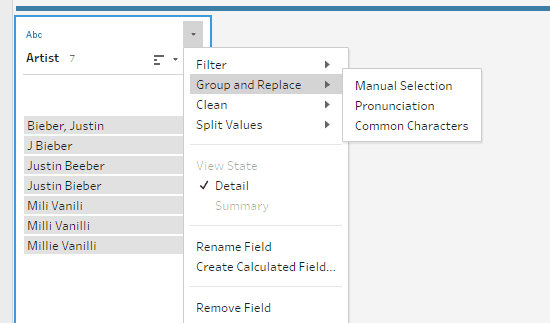 Using Tableau Prep’s “group by pronunciation,” anything that would sound the same gets rolled into a single category. Silent Es and multiple letters are easily combined, but this would be difficult to achieve with formulas: 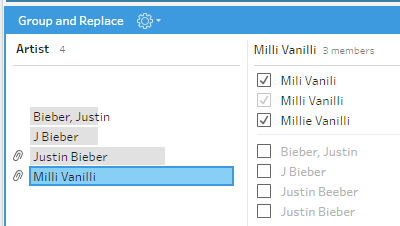 What about the entries “Bieber, Justin” vs “Justin Bieber.” Thanks to Prep’s “Group – Common Characters” feature, we can combine these into a single entity. Again, this would be extremely difficult to achieve with formulas – even Tableau’s powerful Regular Expression formulas wouldn’t provide an easy solution to this.

Previously, all of this needed to be cleaned by hand.

Also, Tableau Desktop has certain limitations about the order in which operations can happen. If you split a field, it cannot be reshaped (pivoted) afterwards. In Tableau Prep, there are no such limitations. Multiple sources can be reshaped, then joined, then unioned, then joined again:

Tableau Prep is still a very young tool. Recent updates have included the PDF data connector (one of my favorite tools in Desktop) and the software will continue to add new functionality, including the possibility of new steps (e.g. rows to columns instead of only columns to rows).

There are a few limitations of Prep to be aware of, although many will probably be addressed in future releases: