5 Reasons to Move from Cognos to Tableau

We are often asked to help clients establish a culture of analytics and an environment of better business intelligence (BI). But that request often comes from companies already using traditional, long-term suppliers of BI solutions. So, we wanted to understand why firms using a “so called” leading BI tool would still be looking for a better BI solution. This paradox is particularly true for users of IBM Cognos, so I thought I would summarize what we have seen.

I remember the Apple computer ads where executives observe users of PC’s and MAC’s and conclude MACs are more powerful because people are using them much more. Same goes for the comparison of Cognos and Tableau. Users are able to get much more usefulness from Tableau, so they use it more. And because they prefer it, they use it even more, and so on.

Some will argue that Cognos is backed by IBM and has more horsepower. But the inability for users to access the system, create meaningful reports and interactively interrogate their data to gain new insights is a major frustration for Cognos users.

The strongest competitive advantage Tableau has over Cognos and all other vendors is its ability to rapidly produce beautiful and highly functional data visualizations full of insight to improve business. And since scripting and writing code is not required for users to connect to data sources and begin exploring their data they can find answers much faster – and without the help of IT.

Tableau has been built with the business user in mind. Cognos was built for IT.

Tableau software takes mere minutes to install, on either Windows or Mac. You can then connect to your favourite data source and start creating dashboards right away. Without any programming or complex scripting, you can connect to databases, cubes, your data warehouse, or flat files. Tableau empowers business users to answer their own questions.

Blending data from a variety of different sources such as SQL Server, CSV, and Excel files is much easier with Tableau. Users get up and running quickly. Cognos can certainly analyze IT governed data, and it has some abilities to work with local data such as Excel and CSV files, but it has never figured out how to work with both. Tableau does this really well.

The ability to change visual layouts and displays is very limited with enterprise systems such as Cognos. Not so with Tableau. The user can easily change layout, color, and alignment by simple drag-and-drop and point-and-click. No custom programming or deep navigation is required to hidden property settings!

Users still want to do offline analytics. Tableau can easily achieve this because there is complete functionality on the desktop. If a Tableau user has an Excel or CSV file, they can be disconnected while creating their own analysis. Additionally, if the user has access to the corporate data sources, they can pull down an extract and continue to work offline. Conversely, a Cognos user would have to build two separate models – one for online and one for offline – and migrating the report between the two data models is a function for an IT person, not a business user.

Tableau users love Tableau. And so does Gartner. 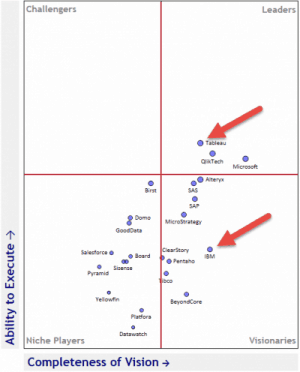 Tableau has been rated for the last few years as the leader in the Leaders quadrant! Cognos customers we have spoken with expressed alarm at how poorly perceived IBM Cognos is when compared to similar products.

“Tableau’s focus on making its customers successful is evident in its top overall rating for customer enablement. Tableau’s core product strengths continue to be its diverse range of data source connectivity, which is constantly expanding, as well as its interactive visualization and exploration capabilities.” – Gartner report.

Tableau is the leader in data visualization, and with it you can choose the best tools for other BI functions such as data warehousing and ETL. With Cognos, you are limited to Cognos tools for every function.

We often hear about one-stop-shopping as being one of the positive aspects of being a full-stack vendor. These tools offer data warehousing; Extract, Transform, Load (ETL); OLAP or ad-hoc query tools; and data visualization capabilities. Whereas Cognos offers these and Tableau only the data visualization piece, this isn’t necessarily a bad thing.

Instead of relying on one vendor’s total solution and being bound to its weakness in any one of those four areas, Tableau customers can pick and choose the BEST tools for each function. For example, instead of being locked into using Cognos Data Manager as an ETL tool. In contrast, Tableau customers have the flexibility to use leading tools that specialize in ETL and data blending such as Informatica, Talend and Alteryx. Furthermore, Tableau offers a much better user experience, so the ability to select other compatible solutions to complete the BI stack is very appealing to IT and business users.

Tableau also makes it easy to integrate with other third-party tools such as R or other statistical packages to extend functionality.

Tableau is the preferred solution for business users to create reports and dashboards.

Because Cognos is implemented and supported by IT, it tends to be centrally controlled. Most Cognos business users don’t have the ability (both a lack of security and skills) to create their own reports. Although Cognos is presented as a tool for end-users, it’s been our experience that they are not able to engage with the tool as much as they would like to.

Once completed, Tableau users can repurpose visuals for any desktop, web browser, iPad or mobile phone without any customization. Tableau automates the creation of dashboards that are viewed on multiple devices.

Tableau is committed to continuous improvement. Cognos seems to be stagnating.

Guaranteed regular updates and enhancements ensure that your BI tools will continuously improve each year to meet more challenging needs. Tableau spends 23% of annual revenues in R&D to make certain it continues to be the best. I don’t know what IBM’s track-record is for significant upgrades to Cognos, but I’m told its technology is a little stale and isn’t advancing as fast as others.

Also, Tableau boasts a rich combination of loyal and passionate customers that drives a vibrant user community. Assistance is quickly available from like-minded people. In addition, there are lots of 3rd party tools that integrate with Tableau, free online training and books available.

Tableau leads a new breed of technologies for which ad-hoc reporting and self-services analytics is key.

Gartner has recognized that business users need tools themselves and can’t rely on IT or other technology experts to help them create reports. That just creates bottlenecks and doesn’t allow users to ask their own questions.

Learn more about how we can help you move from Cognos to Tableau.

One final thought: the job market is hot for Tableau talent. Not so much for other tools. Take a look at this Job Trend from Indeed. Since 2012, demand for Tableau jobs has increased a whopping 1,051%, while Cognos, MicroStrategy, SAP, SAS, QlikView and Power BI jobs have seen negative growth over that time! It clearly demonstrates the popularity of Tableau.

Kick start your Tableau journey! Our Tableau masters can help you rapidly produce powerful dashboards.
To inquire about Tableau services, leave your email.